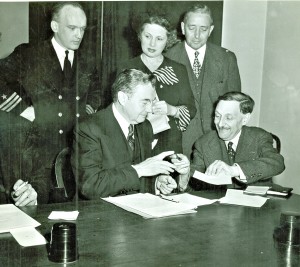 In late May 1945, Justice Robert H. Jackson and his fellow justices were nearing the conclusion of their Supreme Court term.  They had finished hearing oral arguments in new cases and were writing, editing and handing down opinions.  On Monday, May 21st, for example, Jackson announced three opinions for the Court—“the last of [his] crop,” as he described it, of Court opinions for the term.

Justice Jackson at that time also was four weeks into his assignment, from President Truman, to serve as United States chief of counsel in the international trial of now-surrendered Nazis whom the Allies regarded as war criminals.  He continued to do Supreme Court work as he needed to, but since late April his “Nazi prosecutor” job was his priority and filled most of his time.

On Thursday, May 22nd, Jackson left Washington to make a preliminary survey of the situation in Europe.  He took off from Washington that afternoon and, after airplane refueling stops in Newfoundland and the Azores, he arrived in Paris just after 1:00 a.m. local time on May 24th.

General Edward C. Betts, United States Army Judge Advocate of the European theatre, met Justice Jackson at the Paris airfield.  He decided, after conferring quickly in the officers’ lounge there with Gen. Betts and other senior U.S. officials, to stay for a day or two in Paris, working on the Paris-based needs of the case before travelling to consultations in London.  The Army then drove Jackson to the Ritz, where he stayed in “a suite big enough and grand enough for a royal family” and got five or six hours of sleep.

Jackson’s May 24th day was filled with high level consultations.  He first met with Gen. Betts at his office.  His secretary, a British “Wren” (a Women’s Royal Naval Service officer), became Jackson’s, helping him make appointments.  A senior aide to General Lucius Clay, the Director of the Military Government of Germany, came from its Versailles headquarters to meet Jackson.  They went to the airport and met Jackson’s deputy, General William J. Donovan of the Office of Strategic Services.  (At the airport, Jackson also ran into and spoke briefly with his Washington friends and colleagues Harry Hopkins, Averell Harriman and Robert Lovett.)  Jackson then had a lunch meeting with Donovan and OSS staff back at the Ritz.  During the afternoon, Jackson had more meetings with Betts and others at his office.  At 4:00 p.m., Jackson met with Jefferson Caffrey, the U.S. Ambassador to France.  At 5:00, Jackson drove out to Versailles and had a long meeting with Gen. Clay.  At 7:30, Jackson returned to Paris and was introduced to U.S. Army Major Lawrence A. Coleman, a young lawyer who had been assigned to serve as Jackson’s military aide; they reviewed local messages and Washington cables for Jackson.

On Friday morning, May 25th—seventy years ago yesterday—Jackson returned to Gen. Betts’s office.  He reported that the Supreme Allied Commander, General Dwight D. Eisenhower, was in Paris.  Jackson telephoned and Eisenhower invited him and Betts to meet with Eisenhower at his room at the Hotel Raphael.

Although Jackson and Eisenhower had each lived at various times in Washington, D.C.’s Wardman Park apartment building, they had never met.  At the Raphael, Eisenhower greeted Jackson cordially.  Eisenhower explained that he was there to get a day’s rest.

They discussed Jackson’s presidential assignment to prosecute war criminals.  Eisenhower said he did not support shooting anybody without a trial and hoped that trials would not take long.  Jackson explained his preliminary plan to prosecute the Gestapo as a criminal organization, and then to prosecute Gestapo members for the crime of belonging to that organization.  Eisenhower stated his support—he said he had seen so much that in his eyes “any bastard who belonged to that outfit is guilty”.

Jackson asked Eisenhower where the principal Nazi prisoners—the prospective defendants—were being held.  Betts injected that he was asking the War Department for authority to keep them in jail rather than in prisoner of war camps.  Eisenhower said not to bother Washington—simply put the suspected criminals in jail on his responsibility.

Eisenhower stated his full authorization for any war criminal trials, pledging the Army’s full cooperation.  He told Betts to get more men if they were needed.

Jackson, in a later diary note, wrote his initial impression of Eisenhower:  “He is practical, decently profane, and a most impressive leader.”