Posted over on PrawfsBlawg (thanks!), a piece on U.S. Supreme Court Justice Benjamin N. Cardozo and a lawyer who was seeking in 1934 to become a law professor. 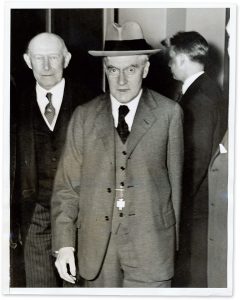 On Monday, August 27, 1928—ninety years ago today—representatives of fifteen nations, meeting in Paris, signed a treaty that outlawed war as an instrument of national policy. They committed themselves to settling disputes by peaceful means.

On behalf of France, the conference host and treaty-signer was the Minister of Foreign Affairs, Aristide Briand. On behalf of the United States, the signer was Secretary of State Frank B. Kellogg. The other signatory nations represented in Paris were the United Kingdom, Ireland, Canada, Australia, New Zealand, South Africa, India, Belgium, Poland, Czechoslovakia, Germany, Italy, and Japan.

The United States Senate subsequently ratified the treaty. Over time, many more nations joined the Pact of Paris. By early 1933, sixty-five states were parties to the treaty, which in the U.S. came to be called “Kellogg-Briand.”

This global agreement did not, of course, prevent all war. A second world war started less than a decade after the treaty. From 1939 until 1945, World War II wreaked a horrific toll in Europe and in the Pacific.

The Allied powers ultimately prevailed. They then, acting together, charged surviving leaders of the Axis powers with the crime of waging aggressive war.

In the European theater, this case was tried in Nuremberg. On November 21, 1945, U.S. Supreme Justice Robert H. Jackson, the U.S. chief prosecutor of the Nazi defendants, explained aggressive war’s illegality by invoking Kellogg-Briand as a crucial development. It was, legally, the spine of the Allied prosecution of Nazi leaders for planning and then waging wars of aggression:

The first and second Counts of the Indictment [charge the] crimes … of plotting and waging wars of aggression and wars in violation of nine treaties to which Germany was a party.

There was a time—in fact, I think the time of the first World War—when it could not have been said that war-inciting or war-making was a crime in law, however reprehensible in morals.

Of course, it was, under the law of all civilized peoples, a crime for one man with his bare knuckles to assault another. How did it come that multiplying this crime by a million, and adding firearms to bare knuckles, made it a legally innocent act? The doctrine was that one could not be regarded as criminal for committing the usual violent acts in the conduct of legitimate warfare. The age of imperialistic expansion during the 18th and 19th centuries added the foul doctrine, contrary to the teachings of early Christian and international law scholars such as Grotius, that all wars are to be regarded as legitimate wars. The sum of these two doctrines was to give war-making a complete immunity from accountability to law.

This was intolerable for an age that called itself civilized. Plain people, with their earthy common sense, revolted at such fictions and legalisms so contrary to ethical principles and demanded checks on war immunities. Statesmen and international lawyers at first cautiously responded by adopting rules of warfare designed to make the conduct of war more civilized. The effort was to set legal limits to the violence that could be done to civilian populations and to combatants as well.

The common sense of men after the first World War demanded, however, that the law’s condemnation of war reach deeper, and that the law condemn not merely uncivilized ways of waging war but also the waging in any way of uncivilized wars—wars of aggression. The world’s statesmen again went only as far as they were forced to go. Their efforts were timid and cautious and often less explicit than we might have hoped. But the 1920s did outlaw aggressive war.

The reestablishment of the principle that there are unjust wars and that unjust wars are illegal is traceable in many steps. One of the most significant is the Briand-Kellogg Pact of 1928, by which Germany, Italy, and Japan, in common with practically all nations of the world, renounced war as an instrument of national policy, bound themselves to seek the settlement of disputes only by pacific means, and condemned recourse to war for the solution of international controversies. This pact altered the legal status of a war of aggression. As Mr. Stimson, the United States Secretary of State put it in 1932, such a war “is no longer to be the source and subject of rights. It is no longer to be the principle around which the duties, the conduct, and the rights of nations revolve. It is an illegal thing…. By that very act, we have made obsolete many legal precedents and have given the legal profession the task of reexamining many of its codes and treaties.”

A failure of these Nazis to heed or to understand the force and meaning of this evolution in the legal thought of the world is not a defense or a mitigation. If anything, it aggravates their offense and makes it the more mandatory that the law they have flouted be vindicated by juridical application to their lawless conduct. Indeed, by their own law—had they heeded any law—these principles were binding on these defendants. Article 4 of the Weimar constitution provided that: “The generally accepted rules of international law are to be considered as binding integral parts of the law of the German Reich.” Can there be any doubt that the outlawry of aggressive war was one of the “generally accepted rules of international law” in 1939?

Any resort to war—to any kind of a war—is a resort to means that are inherently criminal. War inevitably is a course of killings, assaults, deprivations of liberty, and destruction of property. An honestly defensive war is, of course, legal and saves those lawfully conducting it from criminality. But inherently criminal acts cannot be defended by showing that those who committed them were engaged in a war, when war itself is illegal. The very minimum legal consequence of the treaties making aggressive wars illegal is to strip those who incite or wage them of every defense the law ever gave, and to leave war-makers subject to judgment by the usually accepted principles of the law of crimes.

The Robert H. Jackson Center (www.roberthjackson.org), located in Jamestown, New York, is searching for its next leader.  The position description is below.  Please consider applying if you are a strong prospect, and please share this in your networks with others who should be interested in this opportunity.  Applicants should contact the Jackson Center by email, at info@roberthjackson.org.

Thank you very much for your interest and assistance.  We know that teaching, ever better and more widely, the life, work, and legacies of Robert H. Jackson truly matters.

Spearhead revenue generating and fundraising activities to support high quality programs, facility, and staff expenses. The Executive Director shall lead these efforts with staff and Board support.

Ensure, by effective leadership and management, that the day-to-day operations and activities of the Center are efficiently administered and that the organization is fiscally responsible with balanced budgets, attainable revenue projections, and financial stability. Advance the Center’s programmatic excellence. Protect and develop the archives. The Executive Director shall lead these efforts with support from all staff.

All candidates should have proven leadership, coaching and relationship management experience. Concrete demonstrable experience and other qualifications include: