Of the hundreds of press corps reporters who covered the Nuremberg trial of the principal Nazi war criminals seventy years ago, only one, I believe, had been tattooed by the Nazis.

Ernst Wolfgang Michel, then only twenty-two years old, was an Auschwitz survivor.  On his arrival in that Nazi death camp in 1943, a guard had tattooed a number on Michel’s left forearm.

Three horrifying and miraculous years later, Michel covered the Nuremberg trial as a reporter for the Allied occupation-approved German news agency.  At his insistence, each story he wrote bore this byline:  “By Ernst Michel, DANA Staff Correspondent (Formerly prisoner No. 104995 at Auschwitz concentration camp).”

Ernst Michel was a German and Jew.

Born in Mannheim in 1923, he lived a happy, comfortable life there until Hitler came to power in 1933.  Michel’s father’s business soon was taken from him—“Aryanized”—for a token payment.  In 1937, Ernst, then in 7th grade, and all Jewish children were barred from public school by government edict.  That ended his schooling.  He went to work in nearby Bruchsal, as an apprentice in a cardboard factory.

On the night of November 9, 1938 (Kristallnacht), Ernst Michel, age fifteen, awakened to see the Bruchsal synagogue, torched by Nazi brownshirts, in flames.  Gestapo agents arrested his employer, a Jew, and seized his factory.  Returning to Mannheim, he found its synagogue destroyed, Nazis swarming the streets, his family’s apartment destroyed, his mother beaten, his father arrested…

In March 1939, Michel’s parents managed to send his younger sister to France.  She later was sheltered in Switzerland and then made it to Palestine—she lived.

In September 1939, the Gestapo arrested Ernst Michel.  He never saw his parents again.  He learned later that the Nazis deported them in spring 1940 to a concentration camp in southern France.  In August 1942, they were transported in cattle cars to Nazi-occupied Poland.  They were murdered on their arrivals at Auschwitz.

Between 1939 and 1945, Ernst Michel survived in Nazi forced labor and concentration camps, including near Berlin, Paderborn, Auschwitz, Birkenau, Buna, Buchenwald and Berga.  Some particulars:

In April 1945, as Allied forces closed in on the Third Reich, Ernst Michel and two friends, again on a forced march, escaped into the woods.  After more than five and one-half years as a Nazi prisoner, he was free.

Soon the Nazis surrendered and Michel was a displaced person.  He was restored to some health, mentored, and given the chance to become a journalist.

In late 1945 and into spring 1946, Ernst Michel was in Nuremberg, covering the trial.  He watched the U.S. chief prosecutor, Justice Robert H. Jackson, in action.  Michel met the Soviet chief prosecutor, General Roman Rudenko.  Indeed, Rudenko, learning that Michel had observed Dr. Mengele’s atrocities in Auschwitz, contemplated calling Michel as a trial witness but then explained, apologetically, that he could not—with only one exception, it was Soviet policy to call no trial witness who was a German, regardless of the person’s religion.

“Ernie” Michel, as he became to all who knew him, went on to live a long, energetic, constructive and generous “second life,” including—

And a small, personal note:  On May 5th in Poland, I was one of thousands who participated in the March of the Living from Auschwitz (Auschwitz I, the original camp) to Birkenau (Auschwitz II), where trains had delivered Ernst Michel and hundreds of thousands of other prisoners who then were sorted for immediate extermination or sent toward grim, overcrowded, filthy barracks for abuse, slave labor and for most, after not very long, death by starvation, work, disease, torture, hanging, shooting or gas.

In those sites of unimaginable horror, I thought of all victims and very specifically of Ernie Michel, the survivor whom I was lucky to have as a teacher and friend.

I knew then that Ernie, back in New York, was in failing health but at peace, no longer remembering the horrors of war and the suffering he had experienced and seen.  He died two days later.

Ernie Michel’s life, and what he did with all of it, was and is a great, lucky, stirring, inspiring victory. 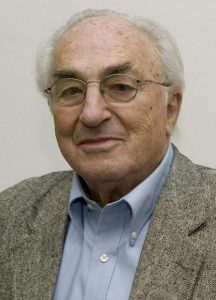